Hosted by CIOB – the Chartered Institute of Building

by Speaker Michael Martin, [OBE from 2018], Project Director for  FCBC, the international joint venture for the Project. 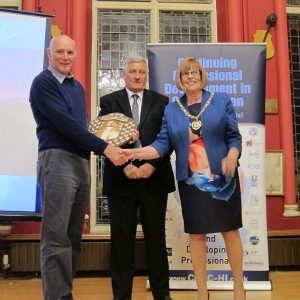 Michael Martin is a senior, main board executive with a breadth of experience in technical, financial and general management across a range of construction disciplines, and an outstanding reputation as an effective team builder.

Originally from Carlisle, his career with Ove Arup then Morrison Construction led him to be involved, latterly as Chief Engineer, on the Highlands’ Kylesku, Kessock, Cromarty and Dornoch bridges. His later responsibility for Morrison’s International division led to developing work on all five continents including Antarctica, and he later became Chief Operating Officer for Scottish Water Solutions’ £2.4bn of joint-venture work.

He remains based in Inverness, semi-retired but in management consultancy.